When was the last time you saw the entirety of Manchester United football team decide they’d had enough, refuse to break out even the most feeble of jogs and take turns at kicking the ball into their own net? Or perhaps you were disappointed last time you saw Usian Bolt when his famous sprint was downgraded to a sauntering, hands in pockets jaunt, just as he got to the final straight? Or maybe you found yourself paying £80 for an Olympics badminton ticket only to find that apparently even the tops seeds don’t need to actually play to win any more. 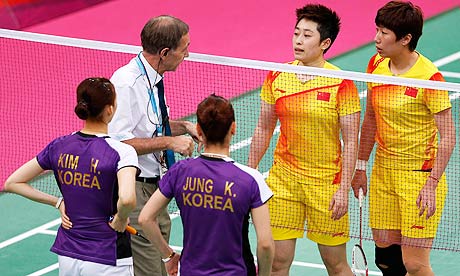 Make no mistake, I’m not so naive to think that no form of throwing matches has ever existed in sport, but what spectators at London 2012 saw yesterday was a complete and utter farce. It’s not so much a thin line between playing tactically and “conserving energy”, but a massive big black marker pen sprawled across the courts. It’s easy to see why the Chinese, Indonesian and Korean’s would want to lose their matches; it provides them with a much easier passage through into the finals and improves their overall chances of grabbing the gold, but that doesn’t by any means make it okay.

Regardless of whether the teams actually did anything “technically” wrong and the supposed “tragedy” that some of the world’s greatest players will no longer be in the running for the number 1 spot, let us not forget the very crux of the matter; the spectators. People have shelled out in excess of hundreds of pounds in anticipation of watching some of the world’s finest players battle it out on court, only to be faced with a quartet of people who struggle to even get a shuttlecock over a net, let alone complete a four hit rally. Whether or not it a loss would have made their next draw easier, sportsmen and women should at least show an ounce of respect to the people who not only turn up, but pay up, to watch them.

These competitors seemed to have absolutely no understanding that their actions were essentially the same as sticking their middle fingers up at their fans and shouting “we couldn’t give two hoots about you”. Neither did they appear to comprehend that what they were doing could potentially jeopardise their future sporting careers. That’s not say they weren’t given their chances; how more obvious can a referee be than brandishing a black card in his hand?

All in all, whilst the incident might be regrettable for many reasons, it’s gratifying that the sports world has at last taken a firm stance on match throwing. Whilst the athletes of 2012 will neither be the first or last to be barred from the games and this is undeniably not the last fixed match, at least future sportsmen and women and take some lessons in what’s acceptable moral behaviour and what clearly is not.

Four badminton pairs disqualified from Olympics, and very rightly so.