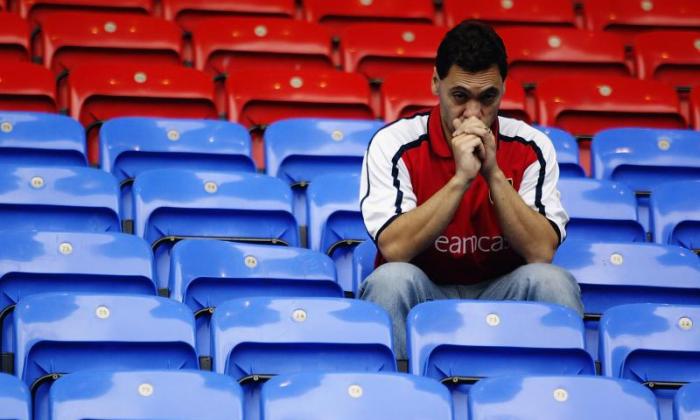 If you’re a fan of heartburn, erratic mood swings or uncontrollable weeping, I suggest choosing Arsenal football club as your team in the top flight of English football.

A team that I grew up supporting (having been born just a few miles away from Highbury) has become one of the laughing stocks of football.

We’ve officially taken Tottenham’s (AKA Shit) title as Banter FC and the people are tuning into our matches just to watch the car crash that is Arsenal Football Club.

We were Champions League regulars under Wenger, we challenged for League titles, and we are still the only team in the history of the Premier League to go a full season unbeaten, yet now we’re supposed to ‘Trust the Process’.

It’s gotten to the point where the rest of the League now sees us as an easy 3 points.

Why did we put a man who had no prior experience in management (other than holding Pep Guardiola’s coffee at City) in charge of one of the biggest clubs on the planet.

The players play with no passion, the management have no clue on what they’re doing and the owners refuse to sell to people who have ambition.

We have become a meme in football.

And yes, I understand your meant to support your team through the highs and lows and I don’t disagree with this, but the players and staff are phoning it in, they’re on ridiculous salaries and they put in terrible performances that you wouldn’t see in a local youth game.

Half the fans wanted Wenger out, the man who was Mr. Consistent, who had the respect of the players and the other managers and what followed?

A myriad of Managers who were not good enough.

Why did we not go for Ancelotti, he was a UCL winning manager who had left Napoli and was waiting for Arsenal to call, instead we went for Mr. ‘Children are the Future’ and now, we’re destined for Europe’s B competition, despite the fact we played less games than any of the other teams in the top 6.

One search of Arsenal on YouTube and your met with pundits mocking us for failing to capitalize.

It’s become a rinse and repeat process every year since Wenger left.

Start the season bad, do good for a decent stretch of fixtures, get hopes up we’ll win something or get top 4, lose to the worst teams in the league and end up somewhere between 5th and 8th.

In the words of DT from AFTV, “when is going to end.

Why supporting Arsenal isn’t good for your health